The Dene people’s relationship with the land has given rise to a particular kind of knowledge that has been passed on orally across the generations, evolving through time so that each new generation can draw upon hundreds of years of Dene experience. This knowledge is articulated through the rich and specialised vocabulary of the Dene language and dialects.

Knowledge that draws upon lived experience and is passed on from generation to generation has become known as “traditional knowledge.” Because this knowledge is highly adaptive and continually incorporates new experiential learnings, it is perhaps misleading to use the term “traditional;” some argue that it is more appropriate to refer to “Dene knowledge.”

Non-Dene people have been made aware of the value of Dene knowledge since their first arrival in this region. Without naming it, early explorers and scientists recognized the value of this kind of knowledge; they almost always hired Dene people as their guides, and depended on Dene knowledge for their survival. The success of the fur trade has always been dependent on the specialized Dene knowledge of fur-bearing mammals. Dene oral traditions affirm that notwithstanding the official histories of the north, Dene knowledge was responsible for the first discoveries of the region’s most profitable resources, pitchblende (radium/uranium) and oil.

In the 1970s, the value of Dene knowledge gained some level of official recognition. Justice Thomas Berger broke new ground in declaring oral testimony admissible as evidence in court. The Sahtu Dene and Métis Land Claim Agreement is founded in Dene knowledge of traditional land use, and it sets out a cooperative resource management regime that requires the incorporation of Dene knowledge in research and decision-making.

There are still significant challenges involved in integrating Dene and other knowledges. As the communities of the Sahtu Region move into an era of self-government, there will be opportunities to apply Dene knowledge to the transformation of government, education, and health and social programs, so that these institutions will be better adapted to people’s needs. 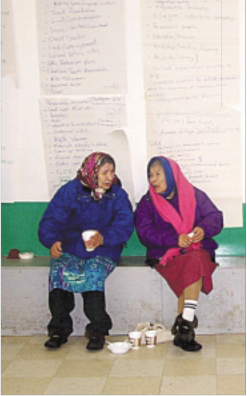 Dene Knowledge Research In The Sahtu

This was in large part the driving force behind the history of anthropology in the Sahtu. Catholic missionary Father Petitot was perhaps the founder of anthropology in the Sahtu during the late 1800s. Throughout the 20th century, many anthropologists have followed in his path - living in the Dene communities of the Sahtu, travelling on the land with Dene families, and then publishing numerous research papers, articles and books. Some of these have made international reputations based on their research in the Sahtu. Unfortunately, the community members have often not had access to the publications; they are published in the south for southern audiences, and the research results usually have not been presented to the communities.

A new era of research was initiated in the 1970s and 1980s with the Dene Nation mapping project and other traditional knowledge research sponsored by the Dene Cultural Institute, or precipitated by the comprehensive land claims process. During this period, the first generation of Dene community researchers was trained to conduct research that was designed to fulfill Dene interests.

However, there were still parallels to the anthropological tradition in that projects tended to be designed by specialists from the outside; community researchers were provided only with the narrow technical training required to conduct interviews. This weakened the level of accountability to the communities, and their ability to effectively harness research results.

Co-operative resource management and the growing confidence of the Dene communities have given rise to new approaches to research. Communities increasingly want to be equal partners in developing and designing research projects, and evaluating results. Community members want to be trained through every phase of the research process, so that community capacity grows.

As precondition for approval of development projects, petroleum corporations are now more prepared to invest in traditional knowledge research. This presents a major opportunity for the people of the Sahtu. It also presents a challenge to ensure that community interests are served. Research must be carefully designed, that community researchers be thoroughly trained to recognized standards, and that research results be verified by the community. 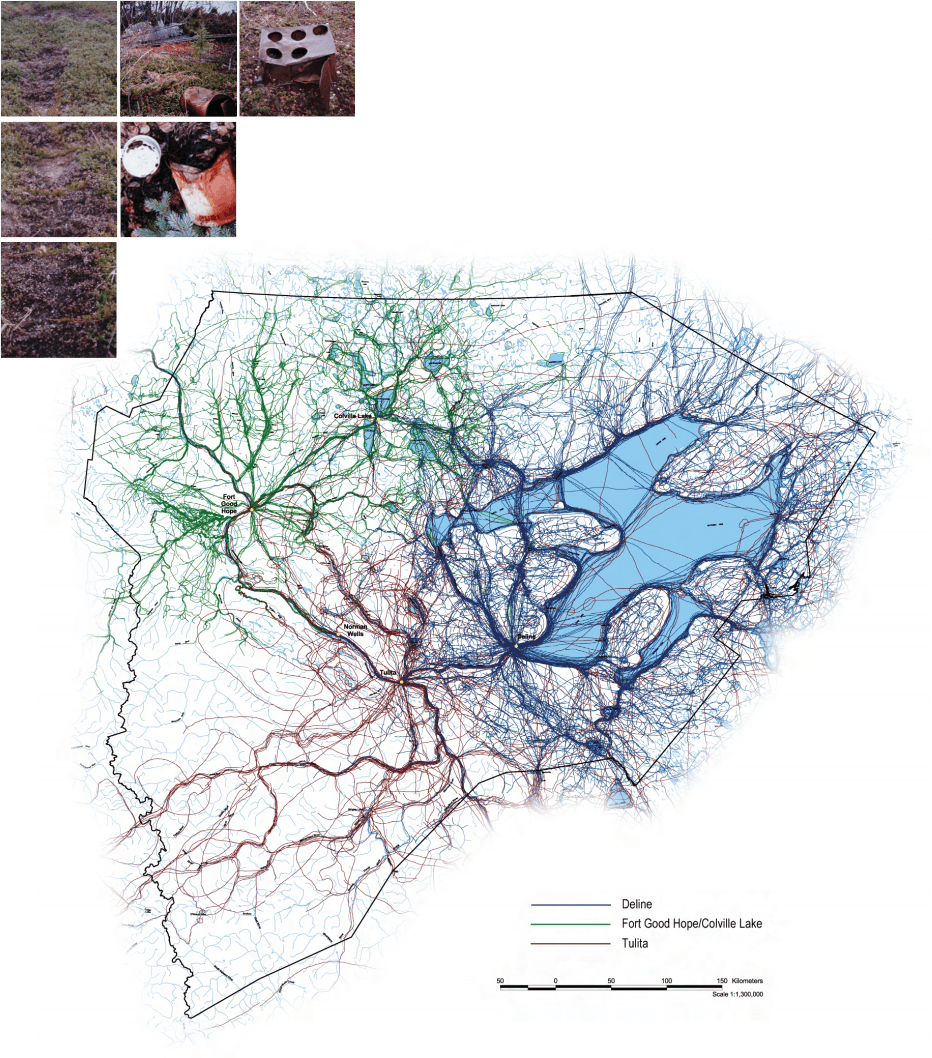 The land itself is of particular importance in transmitting knowledge from one generation to the next. The Sahtu Dene and Métis landscape is known intimately to elders. Trails, used yearround, provide access to a vast harvesting region. The trails link thousands of place names, each with a story, sometimes many, bound to the place. Names and narratives convey knowledge, and in this way Sahtu Dene and Metis culture is tied directly to the landscape. The network of interconnecting trails provides access to a Sahtu land use area encompassing some 300,000 km.

This map shows patterns of land use derived through the Sahtu Dene and Métis trails mapping project. The trails may be water routes or land routes or both depending on the season, and many extend beyond the Sahtu boundary to connect with other major routes of the north. While cutlines and winter roads have opened up further travel routes within the Sahtu, some traditional routes are still used for travel to and from settlements, hunting grounds and camps.

When you put out these maps it brings back memories of long time ago. I remember one time we travelled to town walking, no dogs or skiddoo from Aubry Lake. We camped once. The next day we made it to the Hare Indian River. At that time there were no maps. There were people that were smart that made trail from Colville Lake to Fort Good Hope. Anonymous, Dene Nation mapping project