How do Dene language speakers of the Sahtú Region understand and participate in processes related to the NWT Species At Risk (NWT) Act? Five years after establishment of the Act, the Ɂehdzo Got’ı̨nę Gotsę́ Nákedı (Sahtú Renewable Resources Board) has published a new book, Remember the Promise, based on stories told by Sahtú elders and with a foreword by Michael Neyelle. 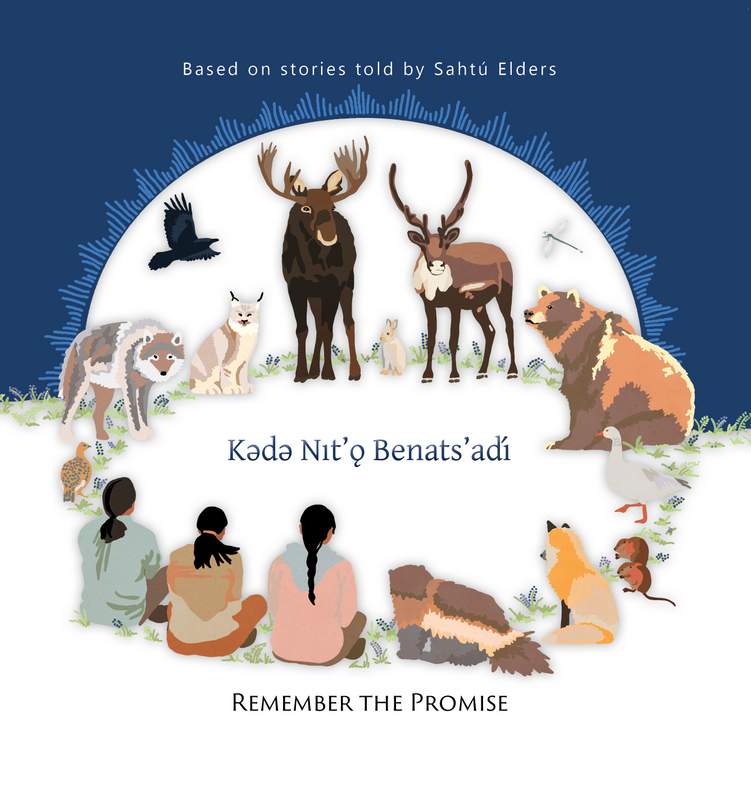 The catalyst for the book was a 2013 workshop in Délı̨nę with elders and Dene language specialists from Fort Good Hope, Tulı́t'a and Délı̨nę. Facilitator and linguist Betty Harnum along with staff from the Government of the Northwest Territories (GNWT) Department of Environment and Natural Resources (ENR), Species at Risk office, explained the Species at Risk (NWT) Act as a starting point for recording stories and terms reflecting Dene perspectives and knowledge.

Recognizing that Dene is mainly an oral language and few are comfortable reading it, the book is an effort to make Dene language literacy more accessible by mixing Dene terms into an English language narrative. Illustrations by artist Jean Polfus help to bring the story alive. To help people learn to pronounce the terms, Ɂehdzo Got’ı̨nę Gotsę́ Nákedı plans to publish online audio versions of the book in the near future. In addition, a learning module for schools based on the book is being developed in partnership with ENR and Ecology North.

In the words of Michael Neyelle, Chair of the Ɂehdzo Got’ı̨nę Gotsę́ Nákedı, himself a Dene language specialist, “Keeping the Dene language alive is part of keeping alive people’s sacred and respectful relationships with other living things. We hope that this book will encourage people to speak and understand the language of this land, the language of the ancestors. Through the language, we are sure to remember the promise.”

It was not possible to include all the rich variations in the language within communities, but two versions of the book include terms from the two major dialects of the Sahtú: Tulı́t’a/Délı̨nę and K’ásho Got'ı̨nę. Dene language terms were translated into English, and the group learned that the concepts in Dene language and English are not exactly the same, since they come from different cultures and worldviews.

The Remember the Promise story starts with ancient times when wildlife were giants and made their own laws, and describes how Dene and other living things agreed to live together and take care of each other. The book includes a glossary and terminology list, as well as information about the Species At Risk (NWT) Act, which is different from Canada’s Species at Risk Act.

The 2013 workshop was sponsored in partnership with the NWT Species At Risk Secretariat. Book publication was funded by NWT Education, Culture and Employment. Buffalo Air provided in-kind support in transporting the books to Sahtú communities. Book launches are being held in each of the Sahtú communities, and books have been distributed to community members, schools and colleges free of charge.

The book is available free of charge on here. pdf Click here to download the Tulı́t’a/Délı̨nę (7.17 MB)  version and pdf here to download the K’ásho Got'ı̨nę version (20.28 MB) . It can also be purchased through the Book Cellar’s online store (http://bookmanager.com/168003x/) or at their Yellowknife outlet, or at the Norman Wells Historical Centre.

You can also view the book online in English.