Wolf coat colour varies from pure white to black, with accompanying shades of cream and brown. The most common colour is grey. The wolf's coat is thick; composed of long, coarse guard hairs and short, soft underfur. In the Northwest Territories, the coat moults only once, in late spring. By winter, the short, new pelage grows into a silky coat with the underfur appearing in autumn.

In the Northwest Territories, two different groups of wolves can be distinguished based on behaviour and distribution. Wolves that live below the treeline or in the mountains are commonly known as timber wolves. They depend mostly on non-migratory prey like moose. Wolves that travel above and below the treeline on the mainland of the Northwest Territories are commonly known as tundra or caribou wolves. They depend largely on barrenground caribou and do not maintain regular territories

Howling may be a wolf's message to pack members of its whereabouts. Ahowl may summon pack members to a nightly hunt or adults may howl to find a lost pup. It may also be that wolves simply enjoy howling, alone or in groups. People who have observed group howls attest to the wolves' obvious pleasure in the occasion and to the marvelous sounds of the wolf voices in harmony.

Throughout the winter, wolf packs travel many kilometres, feeding where they find prey and resting when they are tired, or when extreme temperatures and storms cause them to seek refuge. Winter travel routes include game trails, ridges, seismic lines and frozen waterways. In deep, fluffy snow, wolves find traveling difficult and will often use roads or snowmobile trails to ease movement.

Wolves accompany nearly all caribou herds most of the year. Under most circumstances a caribou can easily outrun a wolf. However, in most cases, wolves simply chase a large herd of caribou, on the alert for any animal caught off guard, that stumbles or appears weak. Old and ailing caribou, or a calf which hesitates a second too long, are often victims. 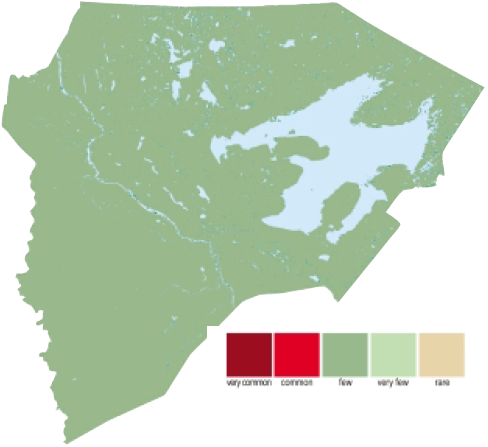 Here's a good story. Long ago, when the wildlife were new, Ékwę́ and Dígaı (wolf) met out on the barrengrounds, north of Aklavik. The leaders of both groups were old.

The old Dígaı leader said, “Ékwę́ should be wiped off the face of the earth.” They were all sitting face to face, and no one said anything for awhile. Finally, old Ékwę́ asked, "What's the misunderstanding? Why don't you simply tell us what you don't like about us?"

Then Dígaı said, "The purpose of this meeting is to wipe you from the face of the earth."

Ékwę́ asked, "What wrong are we accused of? All we look for is food for our survival. And the humans are surviving from us. In the future, people will depend on us for their food.

You, Dígaı, are not like that. You are a conniving animal, and we predict that in the future you will kill humans. There will be packs of you attacking and killing humans. And you will also be killing us. This is how you will survive. You'll kill moose, and every other animal.

"You are a sly animal. When human kills game for his survival and covers it for safekeeping, you will steal his food. And when he's out trapping, you'll go along his trapline and take out the bait. That is how you will be spending your time. Yes, this is how you will be in the future.

"We Ékwę́, we are the good wildlife. We are on the earth only to look for our food. We can never disrupt anything in nature. This is our destiny until the end of the world.

"Whatever people eat, it becomes their flesh and blood. This can never be taken away from man.

"Yes, in the future people will be surviving on us for food, and you will also.

And then Dígaı got up and said, "Yes, Ékwę́ speaks the truth. What he says of the future is true. And I believe him."

Ékwę́ said, "Henceforth until the end of the world you will survive off of us. There'll be no need to bring this matter up ever again. And so, this meeting is over."