Moose in the Sahtu

The moose, Alces alces is the largest member of the deer family. Bulls average a weight of 500 kilograms; however, they may weigh as much as 700 to 750 kilograms. Cows are lighter in weight. Both sexes stand about 2 meters at the shoulder. Moose have long legs, well suited for ploughing through deep snow, walking over bushes and logs, and wading through muskeg.

Thick hides and warm coats insulate the moose against the winter cold. A fine undercoat of grey wool, and coarse, scaly guard hairs helps to retain heat. In spring, the old coat is shed and replaced with a short, dark brown coat. In late summer, the guard hairs grow longer and produce a rich, reddish, brown-black coat.

Antlers begin growing on mature males in April and reach their maximum size in August or September. They are covered with skin and hair, or "velvet". In late August, the blood supply to the velvet is cut off and it starts to shed, aided by the moose rubbing the antlers against trees. 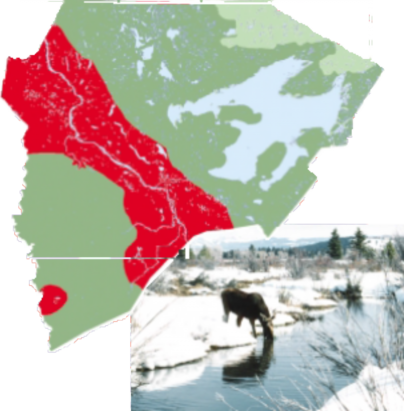 Moose are unpredictable in their behaviour. They have excellent senses of hearing and smell, but relatively poor vision. When a moose perceives a threat, it often withdraws silently into the trees and stands quietly until the danger has passed. A startled or frightened moose will crash noisily headlong through the bush. Its antlers do not become entangled in dense thickets when it runs because it holds its head back so the antlers lie along the shoulders and the branches are pushed aside.

Moose are solitary animals and do not form permanent groups. The only social bond formed is between mother and calf. Moose may "yard" together in winter, but this is more of a temporary survival mechanism than a social one. When snow is very deep, it tends to restrict their movements to small areas which become well-packed and laced with trails.

Status In The NWT

Moose have always been highly valued in the Sahtu. Historically, Dene relied heavily on them for survival. The huge hides were at one time painstakingly prepared and sewn together to cover large, spruce-frame boats. Moosehide leggings, coats, hats and footwear were necessary apparel to ward off the severe cold. Moose meat was essential to people subsisting in remote areas and the hides were used for tents. Asuccessful hunt was occasion for a feast, and the elders were honoured with the head, which is a delicacy.

Today, the moose is still an important resource in many Sahtu communities. With a single animal yielding as much as 300 kg of meat, it continues to be a staple food. In addition, the hides are usually home-tanned and used extensively for making moccasins, heavy winter mitts and handicrafts. Most hunters and trappers below the treeline still prefer handmade mukluks to manufactured winter footwear, and moosehide is essential for their soles, as caribou hide is neither thick nor tough enough. 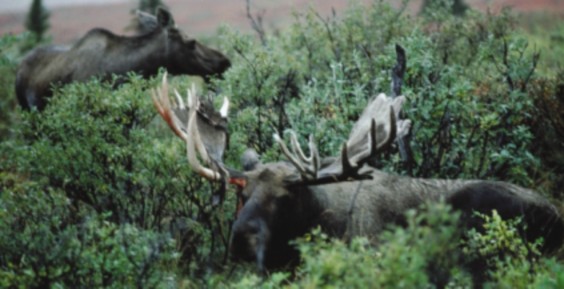 Moose Along The Dehcho

Dad used to tell us stories of people along the Dehcho (Mackenzie River) in summer. This was before my time. Some people only come to trading post to sell their furs and moved back to their chosen camp along the river. Usually the camps would be in a good fishing place. People would stay there for the summer making dry fish.

Dad said that in those days, moose were very scarce. If a hunter found a moose track they hunted it until they killed it or the animal got away. I must also mention Dad saying that once the hunter found signs of moose, the poor animal would have a very poor chance of getting away, because in those days there were many good hunters.

Perhaps this is the reason why the number of moose along the Dehcho went into decline. Dad said hunters would have to spend many hours and days checking out good areas for moose, sometimes coming home empty handed.

That was when the government put restriction on moose. People were not allowed to kill cow or calf moose. I don't know how long the restriction was in effect. After I was twelve or thirteen years old, we would only see one or two moose along the Mackenzie River as we travelled between Blackwater and Fort Norman.