Fish of the Sahtu

The freshwater fish inhabiting the waters of the Sahtu have unique and diverse histories. Many species now in this area survived under harsh conditions in northern portions of unglaciated Alaska during the last ice age (ending about 10,000 years ago) while the majority survived in southern areas of the United States.

Fish are cold-blooded creatures, typically with scaly bodies and paired fins, that breathe by means of gills. Fish are excellent indicators of water quality and the presence or absence of certain species can provide immediate clues as to the conditions within a given area. Contaminant studies reveal further information about the aquatic environment. Due to the wide consumption of fish in the Sahtu, contaminant studies on several fish species are done to monitor environmental and public health.

Fishing remains one of the most important cultural and social activities for the people of the Sahtu. While wildlife may be absent from some areas during certain portions of the year, some fish species always remain accessible and thus have played a major role in the well being of the original inhabitants. World-renowned recreational angling by residents and visitors (a 33 kg Lake Trout was caught in Great Bear Lake in 2001) further reinforce the benefits and need for strong, sustainable fisheries, resource management and research.

My Grandmother told me this story of Bodo and the Giant Fish, She says once the fish in Mackintosh Bay go bad they disappear. That is what happened one time, so we had a hard time.

Bodo went to check his hooks by knife point. He only caught a very skinny fish. He then thought to himself that other people might be using medicine to keep the animals away, so catching this little fish made him angry because there are people and dogs to feed and they are not catching any animals. He put his hook back in the water and caught a fish, but the hole was too small, so he had to use his knife to make the hole bigger. He then got the fish out. It was so big that he had to cut it up and bring some home. My Grandmother said Bodo told them to get two dogs and go to the hooks and pick up the rest of the fish. My granny says that the trout was so big that it had horns about the size of a thumb and the guts were out in a separate pile for the dogs. It was just fat.

That is what my granny has told me about Bodo and the Giant Fish.

Residents of Fort Good Hope have long relied on fish from the Mackenzie River as a source of food for themselves and their dogs. Accelerated oil and gas development in the Mackenzie Delta has many people concerned about possible negative impacts on the fisheries resource. As the fisheries resource is perhaps one of the most valuable of all renewable resources in the Mackenzie Delta and the one most likely to be negatively impacted by oil and gas development, it is one that should be monitored for changes. 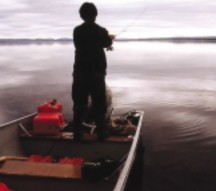 Key Fish Species In The Sahtu

The arctic grayling is a beautiful fish: dark blue on the back and purple grey on the sides. A distinctive characteristic is its large, sail-like dorsal fin, which is coloured a blackish blue with violet spots. Average weights are from 0.5 to 1 kg (1 to 2 lbs.), but the world record arctic grayling was caught in the Great Bear Lake area and weighed 2.7 kg (6 lbs.).

In the Sahtu, the grayling is particularly common in the Mackenzie, Great Bear and Anderson drainages. During the summer, they can be caught in cold, swift rivers and in bays of some larger lakes.

Lake trout are coloured with light spots on a darker background and a light-coloured belly. The background colour may vary from light green or grey to dark green, brown or black.

The lake trout is found throughout the Mackenzie drainage systems. Although most angling has occurred on Great Bear Lake, "lakers" are plentiful and provide spectacular sport in hundreds of fastflowing rivers and streams. The best trophy recorded was a world record catch from Great Bear Lake weighing 33 kg (74 lbs). Many others have come close to this, and 13 to 18 kg (30 to 40 lbs.) fish are common.

Pike, or jackfish, prefer warm, slow, heavily-vegetated rivers, or shallow, warm, weedy bays of lakes. They occur throughout most of mainland Northwest Territories. They have a long body with a dark green to brown colour along their back. The sides are lighter and marked with 7 to 9 irregular vertical rows of yellow to white, bean-shaped spots. Pike generally run between 2 and 7 kg (5 to 15 lbs.), but many pike weighing 13 to 18 kg (30 to 40 lbs.) have been taken

The lake, or humpback, whitefish occurs mainly in lakes, although some are taken in larger rivers and some in lakes with brackish waters. It is a large and somewhat egg-shaped fish with silver sides that may shade to dark or olive brown. The snout overhangs the lower jaw and has two flaps between the openings of each nostril.

The whitefish is mainly a bottom feeder, eating freshwater clams, snails, insects and invertebrates. Some may feed on plankton. Spawning takes place in the fall on rocky reefs in lakes or the shallows of rivers.

The walleye is a member of the perch family and has sharp teeth and two dorsal fins on its back, the front one supported by large spines. Walleye are olive-brown flecked with gold, shading to a white belly. The large, silvery eyes are distinctive.

Also known as doré or pickerel, walleye are plentiful in smaller lakes to the south, but are less common in the Sahtu.

Walleye generally run up to 2.5 kg (5 lbs.). They are easiest to fish in the spring when they are running in the rivers

Fur trade voyageurs gave this "unknown" fish its name. Locally called Coney, it is a member of the whitefish family. With large scales, dark back, silvery sides, and deeply forked tail fin, it resembles a large herring. Still unknown to many anglers, it is found in the tributaries throughout the Mackenzie River Valley. Weights can average 4-9 kg (9-20 lbs) although some have been reported over 32 kg (70 lbs).