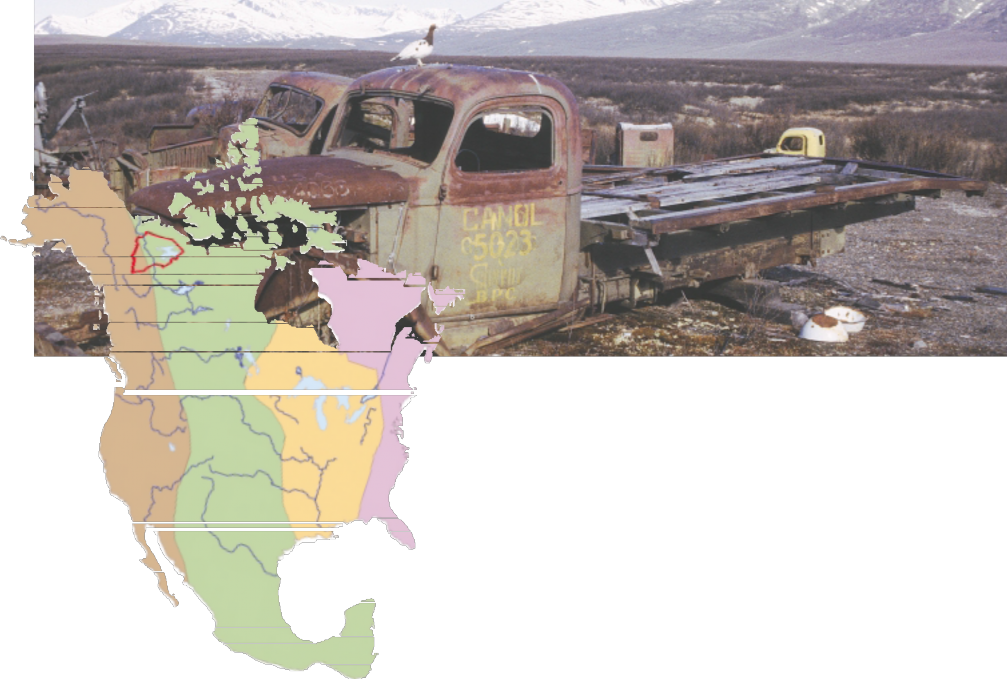 Birds of the Sahtu

There are four major North American flyways: Atlantic, Mississippi, Central and Pacific Flyways. The Sahtu straddles both the Pacific and Central flyways.

Bird migration is usually thought of as a north-and-south movement, with the lanes of heavier concentration following the coasts, mountain ranges and principal river valleys. Generally, the great routes of migration do conform very closely to major topographical features when these happen to lie in the general direction of the travel to be performed. It happens to work out nicely in North America where the coasts, mountain chains and many of the larger rivers do not depart from a northand- south alignment. As a result, birds use the Mackenzie Valley, River and Mountains to navigate their way north and south.

Over 90 percent of the bird species in the Sahtu and throughout the Nothwest Territories are migratory. In all, 41 families and over 200 species of bird spend time in the Sahtu.

The Sahtu also acts as a "production line" for numerous species. The abundant lakes, ponds and wetlands in the forested portion of the Northwest Territories provide important breeding and nesting habitat for a number of duck species and for other aquatic birds such as geese, loons and grebes.

The terms "migration route" and "flyway" are to some extent theoretical concepts. Migration routes may be defined as the lanes of individual travel from any particular breeding ground to the winter quarters of the birds that use them. Flyways, on the other hand, may well be conceived as those broader areas in which related migration routes are associated or blended in a definite geographic region. They are wide arterial highways to which the routes are tributary. 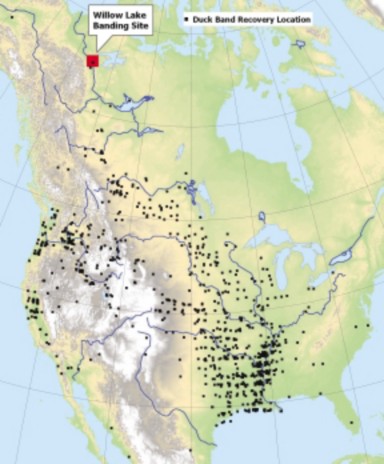 Since 1995, The Tulita Renewable Resources Council, the Government of the Northwest Territories' Department of Resources, Wildlife and Economic Development, and the United States Fish and Wildlife Service have collaborated on a duck banding research project at Willow Lake in Sahtu Settlement Area. Each year, a waterfowl biologist, two assistants and two summer students set 18 funnel traps in August (for an equivalent of 423 trap-nights). Barley is used as bait, around 2300 kg (5000 lb). The primary goal for this site project is to band mallards northern pintail and all other ducks prior to the start of the fall hunting season. 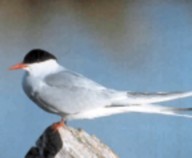 Terns are slender birds with long narrow wings, forked tails, and a pointed bill. The arctic tern (Sterna paradisaea) is grey and white with a black cap and red bill. Though it is primarily a sea bird, spending most of its life over the ocean and along the coast, it moves inland during the breeding season and may be found nesting virtually anywhere in the Northwest Territories, near open waters.

Terns are skillful and agile fliers, earning their living by diving into the water in search of small fish. They undertake spectacular migrations, leaving their breeding grounds in the north to fly to the Antarctic Ocean where they winter for a short time over the pack ice. As daylight hours in the Antarctic decrease, the terns start their return journey up the Atlantic and Pacific coasts following the sun as it returns north.

Although there are many subspecies that vary in size and colour, the Canada goose (Branta canadensis) is always readily identified by its black head, black neck and white cheek patch. It breeds throughout the mainland Northwest Territories as well as on some of the arctic islands.

Canada geese are the earliest of all waterfowl to nest. They arrive in the north while the land is still snow-covered and begin nesting as soon as the nest sites are clear. Although they prefer to nest on the ground near water, they employ a greater diversity of nest sites than all other waterfowl. These include marshes, tundra, islands, cliffs, abandoned nests in trees and tops of muskrat or beaver houses. 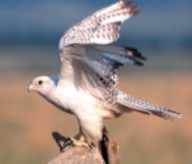 The gyrfalcon (Falco rusticolus), the Northwest Territories' ceremonial bird, is the world's largest falcon (50-63 cm tall). The colour of their plumage varies from dark grey throughout the mountains and southern tundra of the NWT to light grey or white in the east and on the Arctic islands.

Gyrfalcon's do not build nests.Eggs are laid and incubated by the female on a cliff ledges or, more usually, in the nests of other species such as ravens and golden eagles. Gyrfalcons nest in April in the Mackenzie Mountains and in May over the rest of their range. The same nesting ledge is frequently used in successive years. 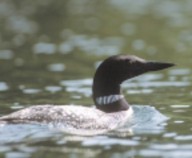 Loons are heavy-bodied birds with strong pointed bills, webbed feet, and short stiff tails. The legs are attached far back on the body, and while this makes loons awkward on land, it facilitates swimming and diving. Loons sit low in the water and dive from the surface. They can remain submerged for several minutes if necessary, and can swim very rapidly underwater. Loons are fish eaters, catching their prey while in underwater pursuit. When taking off, they must flap and run across the water's surface a lengthy distance before becoming airborne.

Four species occur in the Northwest Territories: the common loon (Gavia immer), the Arctic loon (Gavia arctica), the red-throated loon (Gavia stellata), and the yellowbilled loon (Gavia adamsii). The common loon is found throughout the Northwest Territories during the summer season, with the exception of the Arctic Islands. Both the yellow-billed and Arctic loon can be spotted above the tree-line during the summer season, while the red-throated loon can be found along the arctic coast throughout the summer months. 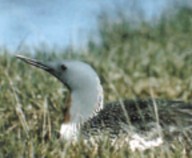 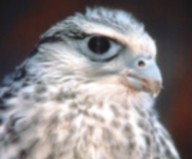 The peregrine falcon (Falco peregrinus) is one of the swiftest birds in the world, able to pursue its prey in high-speed aerial chases, reaching speeds close to 320 km-h in a downward dive. In the arctic, peregrines prey on birds varying in size from small songbirds to ducks and ptarmigan. The falcon swoops down on its prey at high speed and kills it in midair using bill and talons, or stuns it with a blow and kills it on the ground.

Peregrine falcons breed throughout most of the Northwest Territories on high rocky cliff ledges usually near the sea or some smaller body of water, habitat of its prey 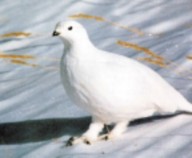 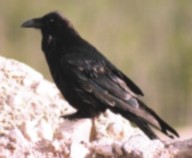 Ravens (Corvus corax) are the most commonly seen bird year-round in the Northwest Territories. They are large black birds with a thick bill, a shaggy ruff at the throat, and a wedge-shaped tail. In flight, they alternately flap and soar like a hawk.

Ravens are found in a variety of habitats, but are partial to cliffs and rocky mountainous country where they soar and perform acrobatics on the updrafts. They also congregate in settlements where tall buildings permit the same activities. Garbage dumps too are preferred spots as the raven is a scavenger and carrion-eater. Ravens are often seen in the company of wolves feeding on the remains of caribou on frozen lakes in winter.

The rough-legged hawk (Buteo lagopus) is a large hawk (48-60 cm tall), it is a common summer inhabitant of the mountains and the tundra of mainland NWT and the southern Arctic archipelago. Winters are spent throughout the USA.

It is the only arctic hawk whose legs are completely feathered to the base of the toes. It has a broad tail and wings, and flying overhead can be identified by its distinctive black wrist patches. The adult plumage is variable in colours and marking but usually displays a dark patch or shield on the belly and a light tail with a distinct dark edge. A breeding pair builds a large stick nest on cliff ledges or on the ground, and may maintain several nests that are reused in subsequent years. Two or three eggs are laid in late May. 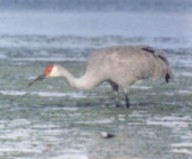 Sandhill cranes (Grus canadensis) are extremely large birds that are nearly a metre long, with a wingspan of up to 2 m. In flight, they can be identified by their outstretched neck, long trailing legs, and characteristic wing stroke (a quick jerk or flap of the wings upward). Adults are ash-coloured with a bare red patch on the forehead and crown. The voice is a deep incessant kr-r-r-oo, which sounds a bit like a piece of machinery in need of oil. Sandhill cranes may be found throughout most of the Northwest Territories, as far north as Banks Island. 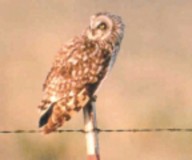 The short-eared owl (Asio flammeus) is a medium-sized owl with a brown back, and buffy-yellow head and breast, streaked with brown. Its ear-tufts are small and not usually visible. Unlike most owls, it is active throughout the day, cruising low, over open country, seeking out voles and lemmings. They are common during the breeding season in areas such as tundra, marshes, grasslands, and low scrub country. They breed throughout the mainland. 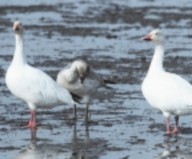 The Lesser Snow Goose (Chen caerulescens caerulescens) has two colour phases, white and blue, and were once thought to be separate species. In the white form, adults are white with black wingtips. In the blue form, they are dark grey accompanied by a white head. They have wingspan of about 90 cm and its average weight is 2.2 to 2.7 kg, the male being larger. In the Sahtu, lesser snow geese breed entirely above the treeline. 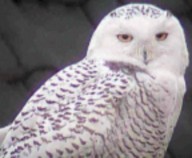 The heaviest of North American owls, the snowy owl (Nyctea scandiaca) stands nearly half a metre tall, with a wingspan of almost 1.5 m. Unlike most owls it is active in the day during the arctic summer, as well as at night. As is the case with most diurnal birds of prey—those that are active during the day—the female is larger and heavier than the male. The average weight of the female is 2.3 kg compared to 1.8 kg for the male. The feathers are sometimes pure white, but more generally they are barred and spotted with dark brown, particularly on the female. As an adaptation to its arctic environment, the snowy owl has completely feathered legs and toes. They usually nest above treeline. 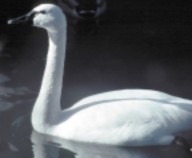 The tundra swan (Cygnus columbianus), formerly known as the whistling swan, is one of the largest birds found in the arctic. It has a wingspan of over 2 metres and a weight of 5-8 kg. It is completely white, with the exception of a slight rusty stain on the head and neck of some birds. The bill is black with bare skin extending back to the eye and sometimes a yellow or orange spot in front of the eye along with black legs.

Tundra swans generally arrive in the Northwest Territories by about mid May. They nest on the mainland above the treeline, as well as on some of the arctic islands and wetlands in the Sahtu. 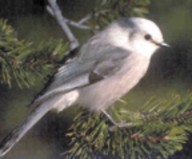 The gray jay (Perisoreus canadensis), 25 to 33 centimetres in length, is slightly larger than a robin. Its tail is long and its wings short and rounded. The throat, cheeks and breast, as well as an area round as a penny covering the forehead, are pearl grey. The back of the head is dark grey, the shoulders, back and tail lighter grey, sometimes with a bluish sheen. The legs are black, and light grey "whiskers" surround the base of the black bill.

The gray jay's fearless and venturesome behaviour towards men living and working in the forest has earned it many informal names. "Whiskey-Jack" is the best known, said to come from the mispronounciation of the native name "wisska- tjon" or "wis-ka-chon" turned into "whiskey-John".